From the Couch Hole: Make It Up As We Go Along

Previously on FTCH, we were back with tales from the crypt and back with brookie-o’s. We were sailing home as a thinner hombre. The previous month was preparing to be gone for the Ringo/Chicago trip. Now that I’m back, it’s prep for the wedding trip at the end of the month. It was Third Summer this week, back in the 90s, and I’m looking forward to a more chilly morning rain today. This week’s pet feature are roomies of my daughter’s kitty, Penny. This is Nine (the calico) and Parts. This week the midnight club answers Mr. Harrigan’s phone and the mystery of Frute Brute. The Ruffles are a twist and at the asylum we say, “This must be the place.” Remember, if there’s a bustle in your hedgerow, don’t be alarmed now, it’s just FTCH. 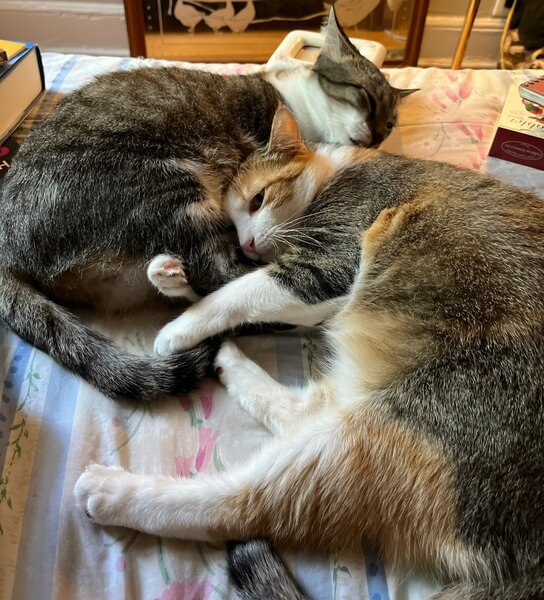 At some point Frito Lays ran out of ideas for new products and just put the same approach to snacks across their brands. There are Frito chips that are this same shape. So now it’s in potato form under the Ruffles brand. The cover makes it look like a braided pretzel but in reality they are more like a spiral pasta. The smoky BBQ flavor is heavy on the tomato-based BBQ sauce and short on the smoky but it’s not a bad combination. What you would never guess is that they bear any relation to Ruffles (one of the best basic chips ever invented).

The fourth Monster Cereal entry this year is the star of the bunch. Originally released as Fruit Brute in 1974-1982. It was originally a mix of fruits like Froot Loops with lime-flavored marshmallows. It was relaunched in 2013 as Frute Brute, now with cherry cereal and marshmallows. It’s not the cereal of my youth but maybe it’s slightly improved because there just aren’t many cherry-flavored cereals. That design? Dang I love that werewolf. This is a winner.

There have been Caramel Ding Dongs in the past, at least back in 2020, but for some reason they are being rebranded as “with s’cream filling” as if this is a new thing. I’m not a Ding Dong consumer much anymore. I think the recipe has changed in the past decade or so. The caramel creme isn’t too bad but the fudge covering has a different flavor than I remember. It’s not a remarkable product and now I’m curious if the non-caramel Ding Dongs still taste like my memories.