From the Couch Hole: To Brighten up Even Your Darkest Night

Previously on FTCH, we captured love and thunder in a bottle. There were strawberries, apricots and a cuban sandwich to make it all better. It was a hot week. Not just “Texas in July” hot, but this is approaching “burning us up” hot. So I hung around reading and watching some visual entertainment. This week’s pet feature is a triple play with my sister/cousin’s trifecta of kitties with (L to R) Fuzz Aldrin, Lucifur, and Memow. I get to see videos of these special cats almost every day and they are adorable. This week in the Couch Hole we go to France, the Moon, and the Amazing Kingdom of Thrills. There are some caliente chips and some salty ones and you should know you’ve got a friend. Remember, go FTCH and leave the driving to us. 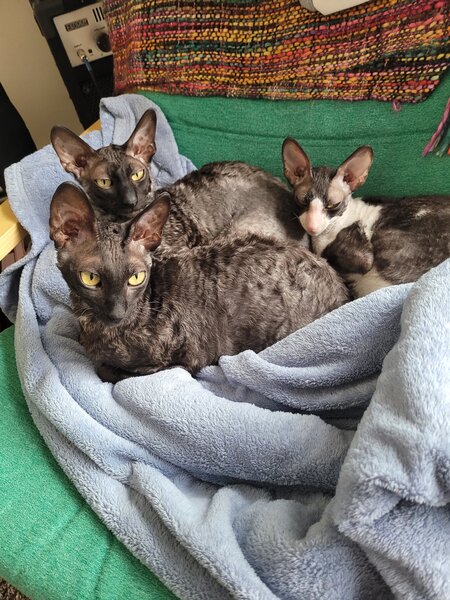 I’m a fan, a big fan, of the hard candy Jolly Ranchers from my earliest candy memories. In a word, these are terrible. All of the promise of the great flavors of Jolly Ranchers is lost in a weird textured, dry candy that doesn’t leave anything but a waxy flavor that barely resembles the original flavors. These have a Swedish Fish type of exterior but that doesn’t even do justice to the weird taste. Skip these for the other 20 gummy choices on the shelves.

Pringles based upon a popular YouTube show is an interesting combination. There is a Last Dab version but that won’t be in my mouth in this lifetime. These are some damn hot chips. I like some heat, especially in my potato chips but be warned that these are sweat inducing. The Verde version had a little more flavor for me but both overwhelmed with heat more than being enjoyable. These will be around because I can’t eat more than three to four at a sitting.

These chips have too many jokes for me to even start to cover in a small entry. Yes, I’m reviewing a bag of Dick’s Potato Chips that I ate. I don’t often review a plain potato chip. These caught my attention by the name but it’s a good chip. They remind me of the long forgotten Bemo Potato Chips of my youth. These salty Dick’s chips are really good. Eat a bag.