Espionage thriller contains the deeper story of a father's love of family and country.

Although it's being marketed as an espionage thriller and has its fair share of tension-filled moments, Farewell also explores the motivation of its Russian traitor, painting a sympathetic portrayal of a man more interested in creating a better nation for his son than protecting his own life. 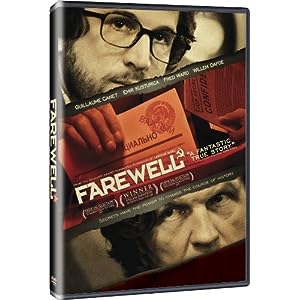 In 1981, an aging KGB colonel named Sergei Gregoriev (Emir Kusturica) crosses paths with a lowly French engineer working in Russia named Pierre Froment (Guillaume Canet), passing him top-secret documents that name Soviet agents deployed in the U.S. and in the process hastening the end of the Cold War. Gregoriev doesn't act out of a desire for wealth or even his own protection by foreign powers, instead simply expressing his disenchantment with Communism in the hopes of aiding its collapse and making way for a new Russia.  For his part, Froment blunders his way to success, making amateur mistakes in his quest to deliver the sensitive documents, endangering the lives of his family but ultimately managing to get the information into Western hands.

The French production is based on a true story, so history buffs may be aware of the final fates of its two leads, but for most viewers the suspense builds as we try to guess whether either of the characters will survive their high-stakes espionage game. Those lead roles are played perfectly by Kusturica and Canet, with Kusturica especially adept at conveying the world-weary nature of his Russian character, resigned to whatever fate may befall him but clinging to his dream of success. Oscar-nominated director Christian Carion (Joyeux Noel) handles the story in an economical and mostly straight-forward fashion, avoiding any grandiose dramatic moments or thrilling action scenes in service to the film's simple theme of a father's love for his son and his nation.
Occasionally, the action cuts away to the hallowed halls of U.S. government as the Reagan administration reacts to receipt of the top-secret information. Those scenes are shot in English and feature fairly well-known actors, with Fred Ward capably channeling Reagan, a nearly unrecognizable David Soul playing an advisor named Hutton, and Willem Dafoe portraying a top U.S. espionage official. While it was an interesting approach to feature the U.S. response to the incoming data, I found it to be a distraction to the main Russian plot, taking me out of the story as I adjusted to the language shift and the temporary presence of U.S. stars. Aside from that minor quibble, the film is paced well and fully delivers on its promise.
Farewell is available on Blu-ray, DVD and video on demand on Tuesday, April 12th. The DVD is nearly devoid of bonus features, with only a trailer, photo gallery, and previews included.